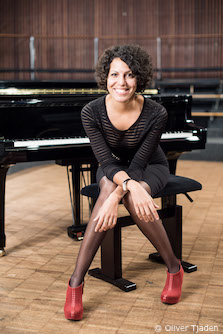 Marialy Pacheco can surely be considered as one of the most prominent rising stars of the Jazz piano. Chucho Valdes once called her "the greatest of young piano talents". At the time, she had just won a young musicians competition in Cuba, where Valdes headed up the jury. When Marialy Pacheco performs one can truly sense her virtuosity, flair and sheer joy of making music without constraints. Born in Havana 1983, Marialy Pacheco was raised in a musical family and began piano studies from an early age at the Conservatorio Alejandro García Caturla. At 15 she attended the Escuela Nacional de Artes, followed by three years of composition studies under Tulio Peramo at the Instituto Superior de Artes in Havana. In 2002 she won the Cuban competition Jo-Jazz, with Grammy award-winner Chucho Valdes presiding over the jury. Two years later she recorded her first album “Bendiciones”. The pianist moved to Germany, toured through Europe – both solo and with her trio – and built international reputation. On the occasion of the 185-year-old jubilee of Bösendorfer, Marialy Pacheco guested in 2013 as the only Jazz-Act, beside classical stars like Valentina Lisitsa and Maria Mazo in the Musikverein Wien. In 2014, Marialy was announced as first female jazz pianist worldwide to be an official „Bösendorfer Artist“. In spring 2014, her new album "Introducing" (Neuklang/Edel:Kultur) was released. After several solo albums, it is a trio album, with Juan Camilo Villa Robles on bass and Miguel Altamar de la Torre (both from colombia) on drums. As "special guests" she got the honor to get german trumpet player and Echo Jazz Winner Joo Kraus, even moroccan Rhani Krija, the Percussionist of STING. In August 2014, she gave her debut as classical pianist and showed her musical variety, when she performed Bach’s g-moll concerto with the Queensland Symphony Orchestra in Brisbane/Australia, conducted by Gustavo Gimeno. Marialy Pacheco performed at national and international festivals like Montreux Jazz Festival, Aalener Jazzfest, Enter Music Festival (Poland), St. Moritz Art Masters, Rheingau-Musik-Festival, ZMF Freiburg, Jazzfestival Oloron (France) Audi Jazzfestival, Ingolstädter Jazztage, Piano City Milano, Havana Jazzfestival and at Beethovenfestival Bonn. In June 2016, she presented the project “Danzon Cubano” together with WDR Funkhaus Orchestra, even presented on Live-Stream at ARTE TV concerts. The project was represent in September 2016 at the Beethovenfest in Bonn. In summer 2016, she performed as a soloist at the Rheingau Musik Festival with "Cuban European Orchestra", conducted by Thomas Hengelbrock. In January, 2017 she guested as a soloist with the legendary “Filmorchester Babelsberg” in the sold out Nikolaisaal in Potsdam. In April 2017, Marialy released the new album "DUETS" – quite an intimate and many-faceted album to which to itself Marialy Pacheco has invited her favourite musicians and friends, like Hamilton de Holanda, Omar Sosa, Joo Kraus, Rhani Krija, Miguel Zenon and Max Mutzke. In summer 2017, she performed at Montreux Jazzfestival and gave her debut in the legendary Ronnie Scott’s Jazzclub in London. Marialy Pacheco is the only, female pianist in the currently row of famous Cuban jazz piano players as for example Chucho Valdés, Roberto Fonseca, Omar Sosa or Gonzalo Rubalcaba.