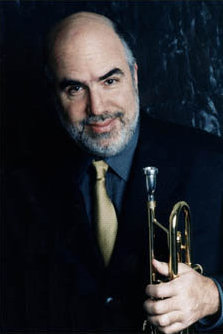 Randy Brecker tours Europe with a stunning performance featuring many of his own compositions as well as rearranged standards and some funky bits and pieces here and there.

Randy Brecker has been shaping the sound of Jazz, R&B and Rock for more than three decades. His trumpet and flugelhorn performances have graced hundreds of albums. Randy Brecker's history is as varied as it is distinguished. Born (1945) in Philadelphia to a piano-playing father, Randy spent summers in stage-band camps where he got his earliest experience in ensemble playing. He began playing RandB and funk in local bar bands while in his teens, but at the same time he had an ear for hard bop. In 1966, he moved to New York City. Some of his first gigs upon arriving there were with Clark Terry's Big Band, the Thad Jones/ Mel Lewis Jazz Orchestra and the Duke Pearson Big Band with whom he recorded 2 albums. Randy also began his foray into jazz-rock by joining Blood, Sweat and Tears. He worked with BSandT for a year and played on their innovative 1968 debut, Child is Father to the Man.Randy left BSandT to join the Horace Silver Quintet. In 1968, Randy recorded his first album as a leader, Score (re-issued in 1993 on Blue Note), which also featured 19 year-old Michael Brecker on tenor saxophone.After Horace Silver, Randy joined forces with Art Blakey's Jazz Messengers before teaming up with brother Michael, Barry Rogers, Billy Cobham, and John Abercrombie to form the seminal fusion group Dreams. The group recorded two adventurous and wildly acclaimed albums: Dreams and Imagine My Surprise - now collector's items - for Columbia Records before they disbanded in 1971.In 1972, Randy was back with Horace Silver, teaming up with brother Michael as the front line in Horace's quintet. By now, the two horn players had become two of the most in-demand studio musicians of the day. After recording the now classic In Pursuit of the 27th Man (Blue Note) with Horace, Randy left to join another new influential jazz-rock group led by old friend Larry Coryell which resulted in the album Larry Coryell and The 11th House. In '74, the brothers joined Billy Cobham's group, Spectrum, with whom they recorded several albums, and by 1975 they were ready to front their own band.The Brecker Brothers were to become a band of immeasurable influence and impact. Hailed by pop and jazz critics alike, their first album,The Brecker Brothers (Arista) which Randy produced, wrote, and arranged, was nominated for four Grammys. The Brecker Brothers went on to record a total of six albums, including the still popular Heavy Metal Be-Bop and garner seven Grammy nominations between 1975 and 1981. In 1978 Randy and Michael played a week in NYC with Frank Zappa which resulted in the much requested album Zappa in NY.In the late 70s. Randy recorded on Charles Mingus' last album. Me Myself and Eye. Randy has performed with various incarnations of Mingus Dynasties, Big Bands, and Epitaphs up to the present day. Also from 1977-1987 the Brecker Brothers owned and operated Seventh Avenue South a jazz club in downtown Manhattan. The club became a major musical hangout with many great bands of all styles, performing nightly.Randy Brecker continued to have a great number of projects and numeral concerts all over the world. In the 80s he often collaborated with his wife, pianist/vocalist Eliane Elias; and in the '90s he toured with the reunited Brecker Brothers. He continues to influence and inspire young musicians, and thoughout the years, has been in constant demand as a Yamaha Clinician, performing at Colleges and Universities the world over. Randy Brecker tours Europe with a stunning show featuring many of his won compositions as well as rearranged standards and of course also some funky bits and pieces here and there. You can look forward to a bebop version of his most famous tune "Some skunk funk" or a funky version of eddie harris 'Cold duck time'!