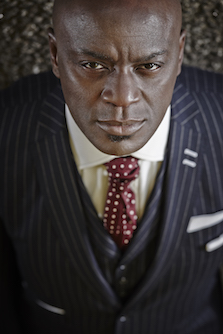 Socially conscious singer/songwriter Ola Onabulé has built an enviable career as an international touring performer epitomizing a move towards hearty, sustaining music, made by artisans with a commitment to quality, integrity and real flavor.

Onabulé is a charismatic and sophisticated British-Nigerian singer/songwriter who
possesses emotional intensity and vocal virtuosity, a poignant storyteller and
capacity to cross cultural and musical boundaries with an unflinching lyrical pursuit
of truth and justice.

Words, melodies, and rhythms walk a delicate tightrope of paradoxes, born of a
childhood and adulthood immersed in two disparate cultures, on two different
continents, during two different periods of time. Onabulé is a rugged individualist,
a deeply soulful musician who has absorbed the surround sound of his youth -
jazz, world - and incorporated key elements into his distinctive style. He is direct
and passionate, confident in his ability to sell a song with conviction. Onabulé has
forged an international career via his relentless program of recordings and
concerts. He has appeared at many of the most respected international jazz
festivals including Montreal, Vancouver, Istanbul, London, Edmonton, Umbria, as
well as concert halls and jazz clubs worldwide. His songs about love, loss, and the
human condition have been performed all over the world with his quartet/quintet as
well as with the Grammy® Award-winning WDR Big Band, the SWR Big Band and
other symphonic orchestras. Onabulé's reach is global and he is emerging as a
musician's musician, possessing a range and aptitude that place him on that
shortlist of special artist andentertainer. His three-and-a-half octave baritone, the
powerful emotions he conveys with it, and his elegant appearance connect with
audiences around the world. Whether in person or on record, Onabulé gives his all,
which includes a thoughtful interpretation of his experiences and the world around
him.