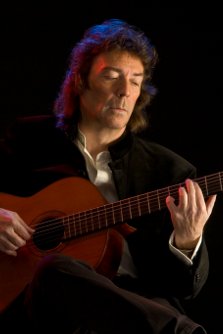 Steve Hackett
Steve is renowned as an immensely talented and innovative rock musician. He was lead guitarist with Genesis as part of their classic line up with Gabriel, Collins, Banks and Rutherford, that produced acclaimed albums such as Selling England by the Pound (a favourite of John Lennon). With Steve's extraordinary versatility in both his electric guitar playing and his composing, he involves influences from many genres, including Jazz, World Music and Blues. He is equally adept in his classical albums that include renditions of pieces by composers from Bach to Satie, his own acoustic guitar compositions that have gained the admiration of many, including Yehudi Menuhin, and ambitious guitar/ orchestra albums such as A Midsummer Night's Dream, recorded with the Royal Philharmonic. With Genesis, Steve's guitar playing produced some of the most memorable moments, from the sensitivity of his acoustic sound on Horizons and Blood on the Rooftopsto the dramatic rock guitar solos of Firth of Fifth and Fountain of Salmacis. As he embarked on his solo career he developed his exceptional range, pushing musical boundaries into exciting areas, inventing new sounds and also techniques such as 'tapping'. His solo career went from strength to strength and the mid eighties not only saw the hit single Cell 151, but also the Steve Hackett and Steve Howe super group GTR, highly successful in America.

John Hackett
John studied music at Sheffield University where he specialised in composition and performance. His main flute teachers have included Paul Chapman, Edward Beckett and David Butt. After leaving Sheffield, he joined his brother Steve Hackett on recordings and tours of Europe and the U.S.A playing flute, guitar and bass pedals. His classical flute recordings include the critically acclaimed "Sketches of Satie" with Steve Hackett on guitar and "Velvet Afternoon", an album of John's own compositions with Sally Goodworth on piano. He also explored improvisation with the ambient group Symbiosis which has led to several recordings and commissions for the B.B.C. In recent years John has returned to the world of rock music with the release of a solo album "Checking Out of London" with lyrics by Nick Clabburn. In 2006 the John Hackett Band played live concerts in the U.K. including appearances at The Boardwalk, Sheffield and The Astoria, London. John lives in Sheffield and continues to tour internationally with the Steve Hackett Acoustic Trio. John is one of the few players in the world to use a vertically held concert flute.

Roger King
Roger has been a mainstay of the good ship Steve for more than a decade now, recording, programming and co-writing in the studio, and translating studio production values to his keyboard playing in live arenas across three continents. You can find his name on 12 Hackett albums and 4 DVDs, at the last count, and still no end in sight. He's twiddled knobs and hit keys for a pretty eclectic client list - making records with Gary Moore, Snoop Doggie Dog and Jamelia amongst others; programming, recording and mixing soundtracks for blockbuster movies Cliffhanger and In The Name Of The Father; writing music for TV (of which more here) and sharing a stage with such luminaries as Evelyn Glennie and John Paul Jones.