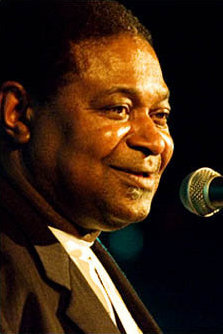 The superb saxophonist Pee Wee Ellis played on many of James Brown's greatest hits in the '60s and '70s, and even served as his band director for a long time. Playing several different saxophones he became most famous for his baritone and alto work. Pee Wee joined James Brown in 1965 and soon came up with the first pure hardcore Funk hit 'Cold Sweat', followed by 26 others that defined what we think of as Funk to this day. Pee Wee has even been called 'The Man Who Invented Funk'. His effect on music was huge, leading directly to George Clinton, Sly Stone and, in a circular twist, Miles Davis' 70s work. By 1970 Pee Wee worked as arranger and musical director for CTI-Kudu records, the most popular jazz label of the 70s. He worked with Esther Phillips as well as George Benson, Hank Crawford and dozens of other CTI artists. In 1979 Van Morrison asked Pee Wee to do arrangements for his 'Into The Music' album, an association that lasted for six years and five albums then was repeated for another five years and five more albums in the last half of the 90s. In between, a reunited JB Horns - Pee Wee, Fred Wesley and Maceo Parker - made several albums and toured extensively. Meanwhile, Pee Wee had found world music, or it had found him. He contributed arrangements for Malian singer Oumou Sangare¹s album Worotan also for Senegalese singer Cheikh Lo. That led to arranging and playing for two Cuban legends: Cachaito and Miguel Anga Diaz. He continues to arrange for World Circuit Records, including work on Ali Farka Toure's last album, Savane. Also on Cheikh Lo¹s latest and funkiest CD 'Lampfall'. The Pee Wee Ellis Assembly regularly tours the world and enthuses the crowds with its unique and enthralling mix of funky tunes.Pee Wee Ellis goes on tour accompanied by the 'Pee Wee Ellis Assembly'.