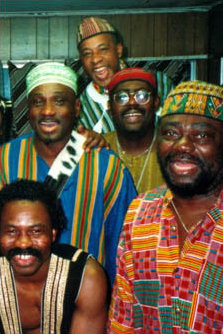 Osibisa are celebratin the 45th anniversary of Osibisa! In the 70s Osibisa was one of the first African bands to gain worldwide popularity with their exceptional mix of African and Caribbean forms. An evening to remember!

Osibisa exploded onto the music world in 1971 with a pulsating and vibrant sound that was to engulf the tired post 60's rock scene. Translated from Ghanaian Osibisa means "criss-cross rhythms that explode with happiness". The band's percussive influence began to manifest itself within the music of their contemporaries. The Osibisa poly-rhythms and percussive breaks were to be an integral feature of the disco boom that was to follow in the late 1970's. Osibisa's unique fusion of African, Caribbean, Rock, Jazz, Latin and R&B paved the way for other potent music forces such as Bob Marley and the emergence of African music in general, in the 1980's. Indeed Osibisa are seen by many as the Godfathers of World Rock Music. One of the important reasons for Osibisa's enduring success has been their highly energetic and extravagant stage show. However their music is still an influential factor in dance music today with no fewer than a dozen covers of "Sunshine Day" which was also used for the Euro 2000 football tournament. For many years now they've toured tirelessly, headlining countless festivals and performing in every far flung corner of the globe. Highlights have included a major tour of India, which resulted in a No.1 Gold Album - an unprecedented achievement for a Western band. The mid 90's saw a re-emergence of Osibisa in North America, where African and Reggae music was & still is gaining popularity. Osibisa have been honoured by President Jerry Rawlings in Ghana where they played a series of concerts celebrating their homecoming. A film of this event is being made into a television program."The enthusiasm shown by the Ghanaian people especially the youth was quite amazing" recalled Teddy Osei Osibisa band leader. A recent appearance at the legendary "Sunsplash Festival" assured the bands continuing popularity as they shared the same stage with the Wailers, Sly & Robbie and Black Uhuru with astounding success. With recent packed out appearances in Cape Town, London, Vienna, Budapest, Lithuania, Estonia and & Switzerland. Osibisa is one of the top "World Rock Music" festival bands.