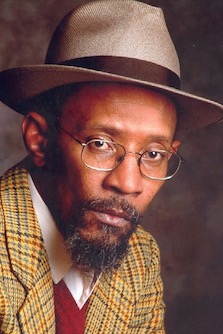 A towering figure in reggae music, Jamaican-British musician and poet Linton Kwesi Johnson is the inventor of 'dub poetry' consisting of spoken word over reggae rhythms. His performance poetry involves the recitation of his own verse in Jamaican Patois dealing mainly with the experiences of being an African-Caribbean in Britain.

He is also available for solo poetry readings at theatres ….

Linton Kwesi Johnson was born on 24 August 1952 in Chapelton, a small town in the rural parish of Clarendon, Jamaica. He came to London in 1963, went to Tulse Hill secondary school and later studied Sociology at Goldsmiths’ College, University of London. Whilst still at school he joined the Black Panthers, helped to organise a poetry workshop within the movement and developed his work with Rasta Love, a group of poets and drummers. In 1977 he was awarded a C Day Lewis Fellowship, becoming the writer-in-residence for the London Borough of Lambeth for that year. He went on to work as the Library Resources and Education Officer at the Keskidee Centre, the first home of Black theatre and art. Johnson’s poems first appeared in the journal Race Today. In 1974 Race Today published his first collection of poetry, Voices of the Living and the Dead. Dread Beat An’ Blood, his second collection, was published in 1975 by Bogle-L’Ouverture and was also the title of his first LP, released by Virgin in 1978. That year also saw the release of the film Dread Beat An’ Blood, a documentary on Johnson’s work. In 1980 Race Today published his third book, Inglan Is A Bitch and there were four more albums on the Island label:Forces of Victory (1979), Bass Culture (1980), LKJ in Dub (1981) and Making History LKJ, Johnson’s own record label, was launched in 1981 with two singles by the Jamaican poet Michael Smith, Mi Cyaan Believe It and Roots. During the 1980s he became immersed in journalism, working closely with the Brixton-based Race Today collective. His 10-part radio series on Jamaican popular music, From Mento to Lovers Rock, went out on BBC Radio 1 in 1982 and was repeated in 1983. From 1985-88 he was a reporter on Channel 4’s The Bandung File. He also toured regularly with the Dennis Bovell Dub Band and produced albums by the writer Jean Binta Breeze and by jazz trumpeter Shake Keane. Recorded at the Queen Elizabeth Hall in London, the album LKJ Live in Concert with the Dub Band was released independently in 1985 and was nominated for a Grammy Award soon after. This was followed by Tings An’ Times in 1991, also the title of his Selected Poems co-published by Bloodaxe Books and LKJ Music Publishers the same year. In 1992 Linton Kwesi Johnson and Dennis Bovell collaborated to produce LKJ in Dub: Volume Two. In 1996 the album LKJ Presents was released, a compilation of various artists including Linton Kwesi Johnson. This was followed in the same year by LKJ A Cappella Live, a collection of 14 poems including some unpublished works. In 1998 Johnson released More Time to celebrate his twentieth anniversary in the recording business. Island also released a two-CD compilation set entitled Independant Intavenshan. In 2002 Linton Kwesi Johnson became only the second living poet and the first black poet to have his work published in Penguin’s Modern Classics series, under the title Mi Revalueshanary Fren. The BBC made a TV programme about LKJ’s poetry, shown in their Profile series on BBC 4. In this year Johnson also released the CD LKJ in Dub Volume Three. To mark his 25th anniversary as a reggae recording artist, Linton Kwesi Johnson released a CD and, for the first time ever, a DVD in 2004 entitled LKJ Live in Paris with the Dennis Bovell Dub Band. Linton Kwesi Johnson has been made an Associate Fellow of Warwick University (1985), an Honorary Fellow of Wolverhampton Polytechnic (1987) and received an award at the XIII Premo Internazionale Ultimo Novecento from the city of Pisa for his contribution to poetry and popular music (1990). In 1998 he was awarded the Premio Piero Ciampi Citta di Livorno Concorso Musicale Nazionale in Italy. In 2003 Johnson was bestowed with an honorary fellowship from his alma mater, Goldsmiths College. In 2004 he became an Honorary Visiting Professor of Middlesex University in London. In 2005 Linton Kwesi Johnson was awarded a silver Musgrave medal from the Institute of Jamaica for distinguished eminence in the field of poetry. He has toured the world from Japan to the new South Africa, from Europe to Brazil. His recordings are amongst the top-selling reggae albums in the world and his work has been translated into Italian and German. Unsurprisingly, he is known and revered as the world’s first reggae poet.