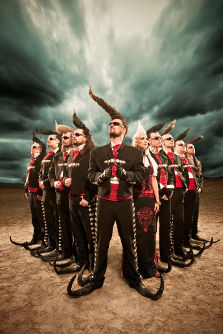 The band's visual look - unicorn hairdos and half meter long, sharp-pointed shoes are already worldwide known and well-established Leningrad Cowboys trademarks. For over fifteen years, the band has performed in hundreds of festivals, clubs and TV shows in over fifty countries; including Europe, Japan, Hong Kong, South America, Australia, USA and the United Arab Emirates. In June 1993 the Leningrad Cowboys pulled off the most amazing production: "Total Balalaika Show", a joint concert with the full 160-member Russian Red Army Ensemble, which the Variety magazine called "the most incongruous - and inspired - crosscultural pairing since Nureyev danced with Miss Piggy". The setting for this sensational show was grandiose: the biggest stage ever built in Finland, on the main square of Helsinki and witnessed by an enthusiast audience of 70.000 people! The Helsinki concert was followed in 1994 with a second Balalaika-joint-concert of the Leningrad Cowboys and the Red Army Ensemble. The "NOKIA Balalaika Show" took place at Berlin’s Lustgarten, where 60.000 people enjoyed the concert on this historical day, which witnessed the farewell march of the allied troops. The show started with Beethoven, was followed by familiar hits like “Let’s work together” & "Gimme all your lovin" - ending up in spectacular fireworks. All together, the Berlin concert received fantastic global media coverage and highly positive response. During the same year MTV USA invited the Leningrad Cowboys to appear at its 11th annual Video Music Awards together with 70 members of the Red Army Ensemble. At the legendary Radio City Music Hall the band played next to rock icons like the Rolling Stones and Bruce Springsteen. The performance received thunderous response from the star-studded audience and was seen by over 250 million viewers worldwide. In addition to the past Red Army Ensemble co-operations, Leningrad Cowboys have designed and performed many other innovative cross musical events; including the "Leningrad Cowboys go Classic"-project and "Global Balalaika Show" in 2003 which featured over 120 multi-cultural performers.