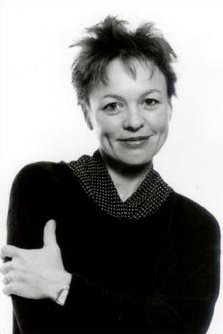 The exceptional performance artist, musician and inventor of the tape-bow violin will be on tour with 'Burning Leaves'. An intimate evening of voice, electronics and violin including pieces from her acclaimed solo shows 'The Speed of Darkness', 'Happiness', 'The End of the Moon' and 'Homeland'. A genuine solo performance highlight!

One of the premier performance artists in America, Laurie Anderson has
consistently intrigued, entertained and challenged audiences with her multimedia
presentations. Anderson's artistic career has cast her in roles as various as visual
artist, composer, poet, photographer, filmmaker, ventriloquist, electronics whiz,
vocalist and instrumentalist. 'O Superman' launched her recording career, rising to
number two on the British pop charts and subsequently appearing on Big Science,
the first of seven albums for Warner Bros., including 'Mister Heartbreak,' 'United
States Live,' 'Strange Angels' and the soundtrack to the feature film 'Home of the
Brave.' Ms. Anderson has toured the US and the world numerous times with shows
ranging from simple spoken word to elaborate multimedia events. Ms. Anderson
has created numerous videos and films, and has contributed music to films by Wim
Wenders and Jonathan Demme and dances pieces by Bill T. Jones, Trisha Brown,
Molissa Fenley and others. She has created pieces for National Public Radio, The
BBC and Expo '92 in Seville as well as composed several pieces for orchestra. In
2003, Anderson became NASA's first and so far only artist-in-residence, which
inspired her performance piece, The End of the Moon. She mounted a succession
of themed shows and composed a piece for Expo 2005 in Japan. She was also part
of the team that created the opening ceremony for the 2004 Olympic Games in
Athens. Later that year, she collaborated with the choreographer Trisha Brown and
filmmaker Agnieszka Wojtowicz-Vosloo on the acclaimed multimedia project O
Zlozony/O Composite for the Paris Opera Ballet. In 2005, her exhibition The Waters
Reglitterized opened at the Sean Kelly Gallery in New York City. One year later
Laurie Anderson narrated Ric Burns's Andy Warhol: The Documentary Film, which
was first televised in September 2006 as part of the PBS American Masters series.
On April 12, 2008 Laurie Anderson married longtime companion Lou Reed in a
private ceremony in Boulder, Colorado. Since the latter part of the 1990s Anderson
and Lou Reed have collaborated on a number of recordings together and Lou Reed
joined Laurie on stage in some of her shows of the 'Homeland' tour. Laurie
Anderson continues to work on the internet, contributing to her web site, and
working on numerous live theatrical and cyber events. Her current project
'Homeland' which enthralled audiences all over the world in her 2007 and 2008
tours will be followed by a CD release in 2009.