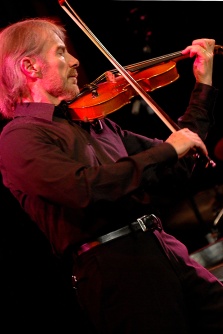 The pioneer of modern jazz violin, Jean-Luc Ponty has put together an outstanding new quintet of brilliant musicians celebrating his legendary compositions and recordings.

Jean-Luc Ponty is a pioneer and undisputed master of violin in the area of jazz and rock. He is widely regarded as an innovator who has applied his unique visionary spin that has expanded the vocabulary of modern music. He was the first bebop violinist. Thanks to his revolutionary style the U.S. jazz magazine ‘Down Beat’ created a violin category for him in its critics’ poll (until then violin was in the ‘miscellaneous instruments’ category)! The Jean Luc Ponty Quintet tours with his new program 'The Atlantic Years'. With this quintet put together by the pioneer of modern jazz violin, Jean-Luc Ponty revisits his legendary recordings such as Imaginary Voyage, Enigmatic Ocean, Cosmic Messenger, among others, which he produced for Atlantic Records between 1975 and 1985, an extraordinary creative period for the violinist/composer with international acclaim, a sound and signature engraved in the memory of his fans around the world. He is supported by four musicians with impressive track records.