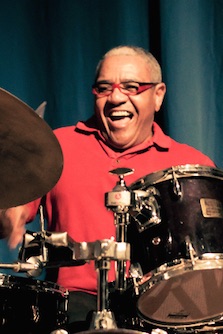 Ignacio Berroa has been recognized as one of the greatest drummers of our times. He has just released his new album 'Heritage & Passion' (5Passion).

Ignacio Berroa has been recognized as one of the greatest drummers of our times. He was honored by inclusion in the 2011 Mp3 compilation entitled “Jazz Drumming Legends” which features some of the most renowned drummers in Jazz history. Ignacio Berroa was born in Havana Cuba on July 8 1953. He began his musical education at age 11 at the National School of Arts and subsequently at Havana’s National Conservatory, beginning his professional career in 1970. By 1975 Ignacio had become Cuba’s most sought after drummer. In 1980 he left his country during the Mariel boatlift and settled in New York City where he met the great Cuban musician Mario Bauza who introduced him to Dizzy Gillespie. In August 1981 Gillespie invited Ignacio to join his quartet. Ignacio Berroa also took part of all the important bands Gillespie assembled during that decade such as: The Dizzy Gillespie 70th Anniversary Big Band, The Dizzy Gillespie All Stars Big Band and the Grammy Award winner, United Nation Orchestra. This relation lasted until Dizzy’s death. Jazz Legend Dizzy Gillespie best defined Ignacio as: “… the only Latin drummer in the world in the history of American music that intimately knows both worlds: his native Afro Cuban music as well as Jazz…”. As an author and a renowned educator he made his mark with the instructional video: Mastering the Art of Afro–Cuban Drumming as well as the books: Groovin’ in Clave and A New Way of Groovin’. He also conducts clinics and master classes around the world. His first album as a leader, “Codes”, was nominated for a Grammy in 2007. “Codes” also won a Danish Music Award in 2007 as best International Jazz Album. His second album “Heritage and Passion” was released in 2014. Ignacio has recorded and played with musicians of the stature of: McCoy Tyner, Chick Corea, Wynton Marsalis, Freddie Hubbard, Clark Terry, Jackie McLean, Jimmy Heath, James Moody, Jon Faddis, Slide Hampton, Michael Brecker, Milt Jackson, Jaco Pastorius, Ron Carter, Charlie Haden, Tito Puente, Mario Bauzá, Lalo Schifrin, Gonzalo Rubalcaba, Danilo Perez, David Sanchez, Michel Camilo, Chico Bouarque, Gilberto Gil, Ivan Lins, Joao Bosco, Lenny Andrade, Lincoln Center Orchestra, WDR Big Band and BBC Big Band to name a few.