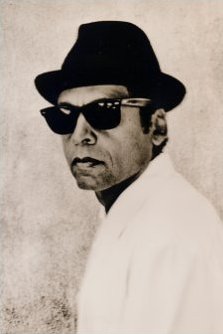 The Return of the Matador! American singer, songwriter and guitarist Garland Jeffreys has just released his new album "The King of In Between" (Luna Parc Records) in June 2011. A unique blend of rock and roll, reggae, blues, and soul!

The Matador is back! Garland Jeffreys has just released "The King of In Between" (Luna Parc Records) in June 2011. It is his first album of new music in more than a decade. Jeffreys was born in Brooklyn, New York on June 29, 1943. He began his career performing solo in Manhattan nightclubs in 1966. He majored in arts at the Syracuse University, where he became friends with Lou Reed, the later co-founder of The Velvet Underground. After graduation, he spent some time in Italy studying art before coming back to Manhattan to further his education at New York's Institute of Arts. At that time he started working with several New York bands before finally founding a group himself in 1969 called 'Grinder's Switch'. The band released the album 'Garland Jeffreys & Grinder's Switch'. Members of Grinder's Switch played John Cale's debut solo album 'Vintage Violence' in 1970. Garland contributed one song for this album called 'PlayFairweather Friend' and made back-vocals for it. In 1973 Jeffreys released his own debut album simply titled as 'Garland Jeffreys'. Around the same time Atlantic also released a 45 RPM single of a song called 'Wild in the Streets' that was not included on the LP. The track received airplay on progressive FM album-oriented rock stations and has become one of his best-known songs. Later, in 1977 when Garland recorded his Ghost Writer album for A&M Records, the Atlantic version of 'Wild In The Streets' was included on side 2. Jeffreys stayed active over the years and has released several albums since, among them the 1992 album 'Don't call me Buckwheat' which featured powerful statements about race matters and racism. Jeffreys is featured in the 2003 documentary Soul of a Man, directed by Wim Wenders as the fourth installment of the documentary film series 'The Blues' produced by Martin Scorsese.