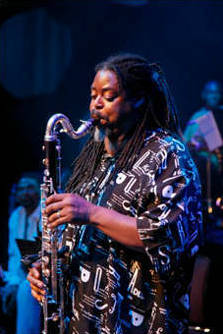 -> Click here to book Courtney Pine and his Band

Multi award winning musician and broadcaster Courtney Pine continues to take the jazz genre to new audiences with his no-boundaries crossover appeal. We are looking for clubs and festivals!

Deeply steeped in the traditions of the Caribbean, this very personal project sees Courtney on top form, bringing together musicians from Africa, the Caribbean and Europe for vibrant exchanges that tell tales of life from a truly multi-cultural view point. It’s an exhilarating mix of Meringue, Ska, Mento and Calypso as played through the lens (saxophone) of a UK born artist with strong, proud Afro-Caribbean roots. No one better embodies the dramatic transformation in the British Jazz scene over the past twenty years than Courtney Pine. The saxophonist heads a new generation of exciting and innovative musicians who have chosen to turn their talents to the demanding requirements of jazz music, in all its shapes and forms. Born 18 March 1964 in London Courtney Pine is primarily known for his saxophone playing. However the multi-instrumentalist who studied the clarinet at school also excels in playing the flute and keyboards. His recent music has attempted to integrate modern British music like drum and bass and UK garage with contemporary jazz styles. He runs his own band and integrates many contemporary musicians in his performances. He also presents 'Jazz Crusade' on BBC Radio 2, the seventh series being broadcast during spring 2007. Pine was appointed Officer of the Order of the British Empire (OBE) in 2000 and Commander of the Order of the British Empire (CBE) in the 2009 New Year Honours for services to jazz music. He was also awarded an honorary doctorate from the University of Westminster in 2004.