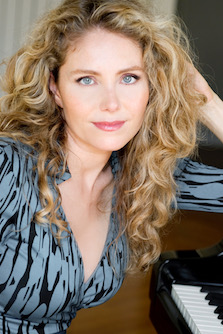 The pianist, singer and composer Clara Ponty's diverse musical background is the source of inspiration for the development of her eclectic musical body of work. A new vocal album, "Sticks and Stones" will be released in 2018!

Born in Paris and raised in Los Angeles, Clara began studying violin and piano when she was five, wrote her first piece when she was eight and won her first piano competition at age 11. The classically-trained pianist (Interlochen Arts Academy, Maryland Conservatory and USC in Los Angeles) abandoned competitive performing in her early twenties to focus on writing. She launched her debut recordings with Universal Music in New York City which brought her international exposure for her original works for solo piano. This was followed by a third album, “Mirror of Truth” co produced by her father, Jean-Luc Ponty. These albums show Clara's tremendous power as both composer and virtuoso pianist, merging her classical heritage with jazz and pop rhythms into a seamless stream of captivating sounds. She did the opening acts for artists such as Michel Petrucciani, the Rite of Strings (Jean-Luc Ponty, Stanley Clarke, Al Di Meola) and Secret Garden. A compilation album of original compositions entitled "Echoes" was released in 2010 (C.A.R.E. music group) in collaboration with renowned german jazz musicians, Wolfgang Haffner, Dieter ILg and Ernst Stroer and guest artists Sebastien Studnitzky and Nils Wulker. It was nominated for the Echo Awards in Germany. After four instrumental albums, Clara took a new turn as a singer songwriter in a pop jazz genre, and recorded "Into the Light" with Harmonia Mundi with Stuart Bruce as co-producer in 2011. Guest artists Jean-Luc Ponty, Nigel Kennedy and Vincent Segal add their great talents to this album. Clara collaborates with cult jazz lyricist Mike Mc Gurk which brings forth songs that cover a wide range of subjects including her philosophical view of life through symbols and metaphors. A new vocal album, "Face to the Sun" will be released in spring 2020 (Hunnia Records)".