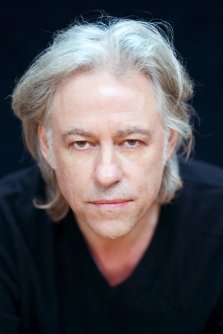 The name is habitual and ubiquitous. It is woven into three decades of the national
narrative and its cultural soap opera. Ask people have they heard of him and all will
answer in the affirmative. Ask them what he does and all will have a separate
answer. Ask do they have an opinion of him and, for good or ill, most will. Ask how
that opinion was formed and they don't quite know. Whistle one of his tunes and
most will remember it but they won't know who wrote it. Bob Geldof is the most
famous secret song writer in Britain. He on the other hand thinks that's what he
does. He thinks that's his job. He's not frustrated or bewildered or upset by this
secret life, if anything there's an appreciative bemusement. "Put a poster on the
street that says "Tonight - Bob Geldof" and most people will say "Yeah o.k. But
doing what?" It's a pity they don't know because, as the records, reviews, awards
and critiques from everywhere and over many years will attest, he's very, very
good. Bob will release his new solo album January 2011 on the Mercury Record
label. Entitled "How To Compose Popular Songs That Will Sell" it is his first album
since 2001's "Sex, Age & Death" and is his fifth album as a solo artist (his eleventh
if you include his work in his band the Boomtown Rats). The album features 14 new
Geldof compositions recorded with his band in his home and in various friends'
studios and produced by his longtime collaborator Pete Briquette. Lyrically the
album is full of love, hope and joy and one senses that Geldof is more comfortable
in his own skin than ever before.