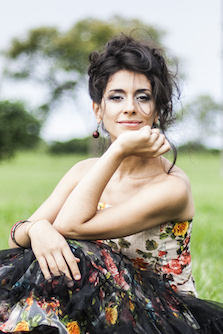 Bianca’s entire art was naturally born out of the affective bonds she ́s weaved
throughout her life. As a due heiress of her father ́s musicality – the great
composer, pianist and guitarist Egberto Gismonti - she started, at the ripe age of
15, to accompany him on tour around the world. During her musical college years,
she befriended Claudia Castelo Branco, another young pianist, with whom would
co-found “Duo Gisbranco” – growing into a successful eleven year career
comprising of three albums, one DVD and extensive world-wide touring. Yet, the
encounter with drummer/percussionist Julio Falavigna was bound to happen.
Based on Bianca’s new compositions, they’ve taken their personal union over to
the musical field, together conceiving and producing “Sonhos de Nascimento”
(Dreams of Birth). Furthermore, from 2013 to 2014, they’d consolidate a trio format
alongside bassist Antonio Porto, thus realizing a common sonic identification,
touring South America (Brasil, Argentina, Uruguay), Europe (England, Austria,
Spain and Portugal) as well as Japan (at the prestigious Cotton Club venue).
Traveling from explorations towards solutions, the larve-like sleep of “Dreams of
Birth” (“Sonhos de Nascimento”) blossoms unto the butterfly-ish free flight of
“First Sky” (“Primeiro céu”), her second album released in 2015. This record had
special apeearances by singer Jane Duboc and harmonica player José Staneck. In
2016, the same album was released by Impartment Records (Japan) and Quinton
Records (Austria), allowing for a new round of tours over Europe, Africa and Asia,
during which her new album which is to be released in 2018 - “Unveiling Seas” was
recorded in Budapest, under Hunnia Records. All throughout, besides her own
compositions, her fathers’repertoire remained part and parcel of her
soul, being somewhat always present during the performances. In this year,
celebrating Egberto’s 70th Birthday, Bianca decided to put together a full set-list in
his honour, with many of the compositions which became hallmarks of his career.
Classics such as “Palhaço”, “Lôro”, “Água e Vinho”
and “Maracatu” are in this new show which has been captivating audiences
worldwide in 2018 as well as a homonymous CD to be released by Hunnia Records
in 2019.